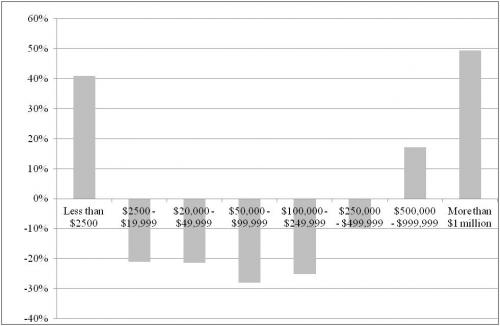 Although the resurgence in interest in local and regional food systems has received a lot of media coverage, the dominant trend in U. S. agriculture at the farm level has been towards greater concentration. Here are two graphs that tell much of that story. The first graph shows the percentage change in the number of farms in different sales categories for the period 1997 to 2007. The graph clearly shows that the number of farms with sales in the broad range between $2500 and $500,000 decreased while the number of very small farms (those with less than $2500 in annual sales) and large farms (those with more than $500,000 in annual sales) increased.

The second graph is for a 25 year period (1982-2007) and provides the data needed to complete the story. This graph shows the percentage of total U.S. farm sales received by different size categories of farms. The smallest category of farms here are those with sales below $10,000 annually. Although 60% of all U.S. farms are in this category, their total sales represent only about 1% of all farm sales (the category itself is not visible in the graph except for 1982). Two trends are very visible in the graph -- (1) the percentage of total sales received by farms in the $10,000 to $249,999 category declined substantially over this period and (2) the percentage of sales received by farms with annual sales above $ 1 million more than doubled from 27% in 1982 to 59% in 2007. In 2007, the largest 1.8% of all U.S. farms received 59% of the sales revenue.

The “disappearing middle” of American agriculture is a major concern for some observers. This web site http://www.agofthemiddle.org/, is dedicated to providing additional information about the problems these farms face and proposed strategies for addressing the situation.