The last four seasons on the Queener Farm, with over 100 apple varieties, have helped us determine which apples thrive or struggle under organic care. Which ones need less fungicide. Which ones are attractive to the coddling moth. Which ones drop early when it’s too hot and dry. Which ones pollinate well when it’s cold and which ones don’t. Every month of each apple season whittles down the list of those that are resilient in all the conditions we encounter. Of course, none will make it through every possible weather challenge, but having lots of diversity means there are almost always some that do well. 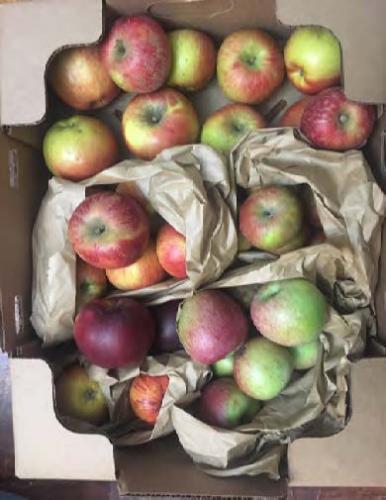 This year, we learned a lesson about fall rains and apple splitting when 4.5 inches fell in two days in mid-October. The huge influx of rain caused many apples to split. A few wonderful apples did not and, as the Willamette Valley is no stranger to abundant fall rain, we’re taking another look at these apples.

One apple really stood out after the rain - the Hauer Pippin. On an abundant season, like last year, the one Hauer Pippin tree was hardly noticed. It sits there, covered in apples that come so late in the season they’re almost a footnote. We’ve always seen them as an important part of biological diversity efforts because, as an apple out of Santa Clara, California, they fill an important niche of not needing many chill hours. They’re also tasty, they’ve made it onto the slow food ark of taste, and reasonably disease resistant. It seemed smart to propagate these and so, in 2015, we added 5 more. This year however, left us feeling like maybe we should add many more.

We call extreme weather events like this rain “selection events.” That’s sometimes an extreme example of looking for the bright side of the loss of lots of apples at once. Wading into parts of the orchard in rubber boots on the Monday after that rain was a heartbreaking experience. So many of the apples we were depending on for the late part of the season had split. Some with just tiny slits near the stem and some nearly exploding on the trees but all of them ruined for fresh sales. Among the wreckage a few apples stood out. The Baldwins, a full-flavored East Coast favorite, did well. And the Hauer Pippin, a California native, emerged as our climate change insurance apple. I had seen the Hauer Pippin as mostly a genetic oddity that we would save for the time, hopefully many years away, when our winters would become much warmer. Discovering its other gift – handling massive rain – makes me want to add more now to deal with our wetter winters.

Climate change will throw many weather curve balls at farmers in the next several years. Selection events will likely be happening all the time. We won’t learn what we need from them unless we have the biodiversity on our farms to observe the range of reactions to them. If I had a typical orchard with just a handful of varieties, I could have simply assumed that the Willamette Valley was becoming the wrong place to raise any late season apples, simply too much risk of splitting rains.

Our diverse orchard brings us a piles of challenges but it also gives us a five month long apple season, an almost unimaginable range of apple flavors and regular lessons in resilience.