I almost overslept on Saturday morning, when March 2nd rolled around. My cell phone’s alarm jangled repetitively, an hour earlier than usual, and in my sleepy state I couldn’t for the life of me figure out why I had set it to such an earlier time. I flicked the alarm off and sank back into a light doze; my subconscious rationalizing the whole time why it was perfectly okay to sleep in… 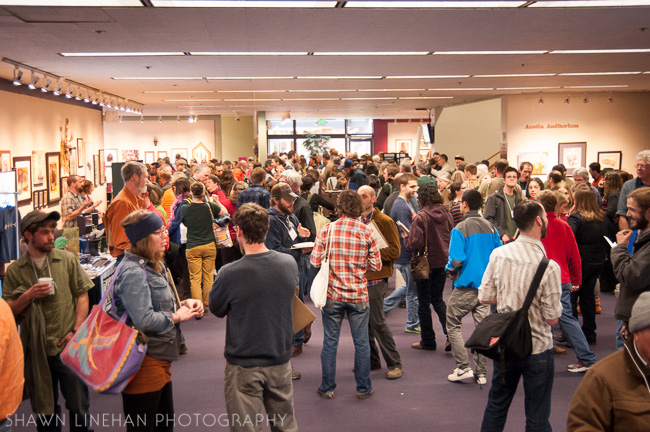 There weren’t any goat kids at present that needed to be fed, there was no cow waiting to be milked, no animals out on pasture waiting to be moved. No one would care if I slept in just a *tiny* bit longer, right? I really hope I’m not the only farmer who pleads guilty to the fault of early morning reasonings like this. Say it ain’t so, folks!

Drifting back into the oblivious depths of slumber, my mind suddenly remembered why that alarm was going off earlier than normal. “Holy Kohlrabi, today’s the OSU Small Farms Conference!” All thoughts of sleeping in were thrown out the window as I scrambled around and got myself ready to face the day. “Great… I’m running late, it’s a one hour drive down to Corvallis, and I was already cutting it close when I was planning to leave on time!” Breakfast consisted of half a bagel. Barn chores were done so fast that even the pigs remained quiet as they watched me rush through everything like a whirling dervish. I couldn’t find my jacket.

In the end though, I did manage to get out the door and to the conference in time. I even had ten minutes to spare. Granted, I probably could have had more than ten minutes to wander around the building if a parking spot had been easier to locate. Last year there was a head count of something like eight hundred people at the Small Farms Conference. As I surveyed the staggering amount of cars parked outside (or perhaps I should say the staggering LACK of parking space??), I wondered if we were going to break that record this year. I really hoped so.

I’ve been looking forward to the Small Farms conference literally all year. It’s the highlight of my late winter days. Quite a few people have asked me why I enjoy it so much; why I want to go so badly each year. My first response to their questions is always rather tongue-in-cheek as I tell them to “come with me and they’ll find out.” But beyond my saucy answers, there are a few normal reasons why I love it. The main reason is that it’s an amazing, information packed day. I love it that I can be in one building and learn anything from pasture management, starting a farmer network, basic artisan cheese making, to seed saving! Add in the fact it’s an awesome way to meet likeminded people, the lunch is excellent (an army is not the only thing that marches on its stomach; this farm girl likes her food too!), and that the whole thing is done in a very professional manner, and you have before you the explanation as to why I’ve come to love this event. You won’t find anything else like it.

I’ve obviously stated the pros about this conference, but what about cons? Are there any downsides to such an event? Yes, actually. There’s one. I would say the only con I’ve found about the Small Farms Conference is that they put entirely too many good class choices in each session. [Insert a most un-amused look at such a predicament] That probably counts as a good problem, but it sure didn’t seem like a good problem at the start, when I had to decide which classes to skip, and which ones to attend!

Finding a seat for the morning session was almost as hard as finding a parking space outside, it turns out. I have no idea what the headcount was this year, but it sure looked like more than eight hundred to me… On second thought though, you probably shouldn’t go by the word of a nearsighted person when it comes to counting. Soon enough a seat was found, and I eagerly waited for the keynote session which would spotlight some “greenhorn” farmers, and one “grayhorn.” The movement of young farmers is burgeoning all across America, and this excites me to no end. 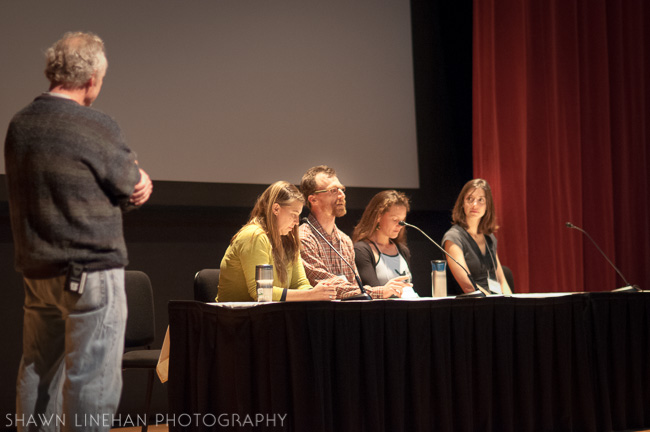 A young farmer myself, I was looking forward to hearing from other folks who were also in this category, and gleaning some new knowledge. I was not disappointed. The four greenhorn panelists shared their experiences in starting a farm with little experience, capital, or knowledge; yet despite the setbacks each one faced, they succeeded in their dreams, and succeeded quite well if I may say so! With the addition of Frank Morton (owner of Wild Garden Seed, in Philomath) as the “grayhorn” of the session, the dialogue between the five farmers was kept going at a lively pace that kept everyone interested and eager for more.

When the keynote session ended, I had to make that final decision on what class to go to next… There were three classes that I wanted to go to in the first session: The first being a continuation of the keynote session with the greenhorns and grayhorns. The second being a class on selling farm products via the internet. And the last was a pasture management 101 session. In the end, I chose to go to the pasture management class, and I’m glad I did!

I’m a small farmer who depends heavily on pasture to keep the farm running. For the last 5+ years I’ve been working on bringing the fertility of my pastures up, and I figured it would most likely be beneficial to learn more about taking care of the forage I grow out beyond my barn. And beneficial it most certainly was! There were definitely a few “Oops” moments as I learned that one should never graze their pasture down more than 3” in height. I knew that I wasn’t supposed to graze to the ground, but never knew that three inches is considered the lowest a person should let their pasture get. Or that the condition of your pastures in September/October is going to reflect what your pasture will be like next year?

Good heavens, why didn’t someone tell me that sooner?! Okay, so I messed up a bit in 2012; but 2013 won’t find me making those same mistakes.

I decided to keep “grass” as my theme for the day and my last two sessions to attend were ‘Pasture Management 201’ (basically a continuation of the first one; but more in depth), and ‘Managing Breeding for Pasture Based Production.” I sorely wanted to go to the session about the basics of artisan cheese making… And *almost* did go to it, but veered off at the last minute and headed for the grass-based breeding session. First things first; get the grass in better shape before we add in another project to start.

The Pasture Management 201 session was every bit as good as the first, as we discussed topics such as rotational grazing, applying fertilizers, and watching for the daffodils. Wait a minute… Watching for daffodils? Um, wasn’t this a class about grass? And now we’re talking about flowers?

That one little tip about watching for daffodils made my whole day. Even if I walked away from the conference with nothing besides that little bit of information about the daffodils, I would have been happy. Allow me to explain now, before you start wondering if I’m off my rocker (i.e. daft, crazy, or “a French fry short the order.” Hehe). It seems that daffodils pop up and start blooming at the same time that grass starts growing again; so when you see daffodils, then you know that grazing season is a few weeks away (providing that your pastures weren’t overgrazed in the Fall). Applying nitrogen to your pastures a couple weeks after you see the daffodils can also extend your grazing season! 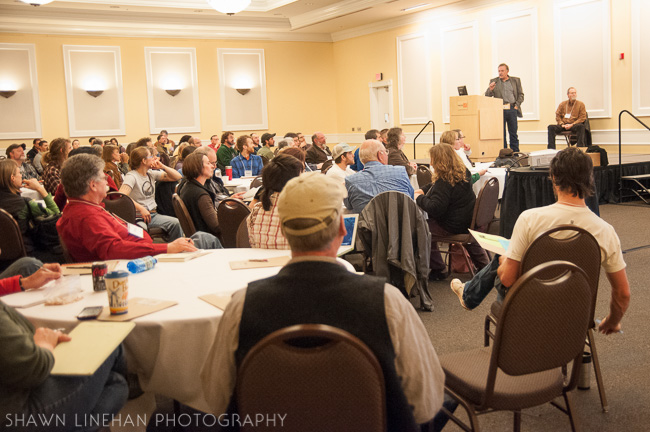 So maybe I’m a simple person. Maybe I’m easy to please. Or maybe I’m just a farmer who gets excited about things like this. But that one little tip, to watch for the daffodils, was awesome. What a grand visual for us grass farmers! I was delighted when we were told this, as my own daffodils had just bloomed the week before. Rotational grazing, here I come!! If all goes according to plan, (I know, I know... When does anything go according to plan in the agriculture world??) then my stock should be back out on grass by the time you read this sentence.

The last session, on managing a pasture based breeding program, was chock full of good information too, although slightly hard to mentally convert since I raise dairy animals and the panelists raised beef cattle and sheep. But I still kept busy jotting down notes, and came to realize that I’m really not culling hard enough in my own herds. Phooey. If you want to succeed with a pastured based herd, then you have to cull very aggressively and only keep the animals that fit the requirements of such a goal. You need an animal that knows how to forage and knows how to convert that forage into meat/milk as efficiently as possible. You need an animal that can raise offspring each year, that isn’t prone to sickness, and can withstand the elements without you coddling it. It seems I need to work on this… I have a tendency to keep animals that perhaps don’t do so well on pasture because I like their pedigrees and genetics for milk production. But it seems it’s time to tighten things up a bit and change course. I need those production genetics, but I more than that, I need genetics that won’t fall apart when introduced to pasture. Wish me luck.

By the time the day was over, I was feeling rather cross-eyed from so much information, and if I had to choose between the two adjectives of feeling “hungry” and “ravenous,” I sheepishly have to admit that I was leaning heavily towards the latter choice. If I didn’t stand at 5’ 7” then I might wonder if I was part hobbit after all.

The ride home was spent munching on a snack, looking over my notes, and spying daffodils on the highway’s edge.

Daffodils are a good thing. So are Small Farms Conferences. This I know to be true.

See you next year? 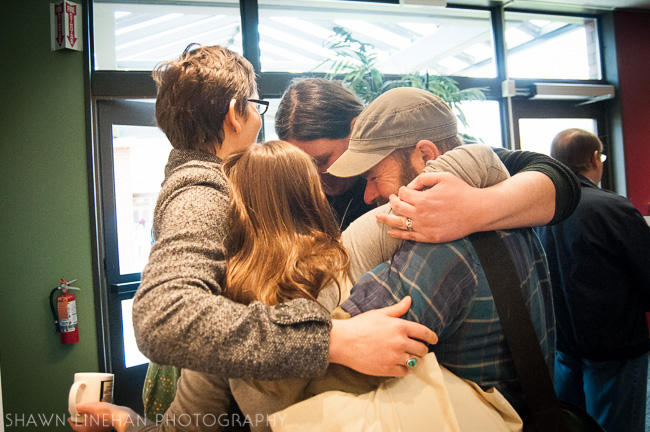